Gemilut Hasadim - a Spontaneous Outcome of the Montessori Method

"The first step towards a social consciousness recalls the 'spirit of the family or tribe', for in primitive societies, as is well known, the individual loves, defends and values his own group, as the end aim of his existence. The first signs of this phenomenon amazed us, because they occurred quite independently of us, or of any influence that we could have exerted. ...This unity among the children, which is produced by a spontaneous need, directed by an unconscious power, and vitalized by a social spirit, is a phenomenon needing a name, and I call it 'cohesion in the social unit'."Maria Montessori, The Absorbent Mind p. 212, Chapter 23

Not every day can bring about the sense of social cohesion in the classroom. These are, after all, young children going through all sorts of developmental stages. But the days and weeks where they come together, working together to solve problems and loving one another, are spontaneous and beautiful displays of gemilut hasadim, acts of loving kindness. Gemilut hasadim is considered one of the highest mitzvot (commandments) we can fulfill and seeing it manifest in the classroom is exciting.

In this instance, the following took place over the course of about 2 minutes. 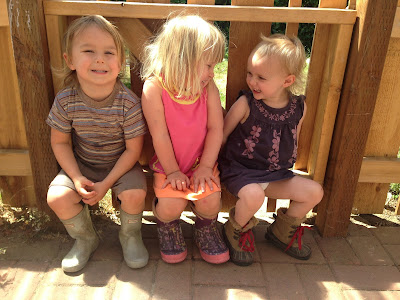 Outside after snack, waiting for the last friend to join them, instead of playing or choosing something else to do. 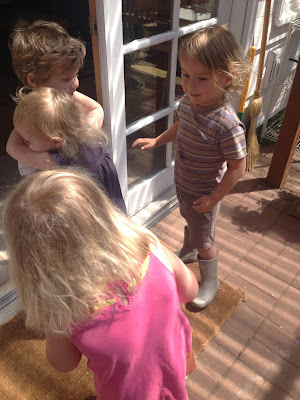 He is finally outside! Let's hug him! 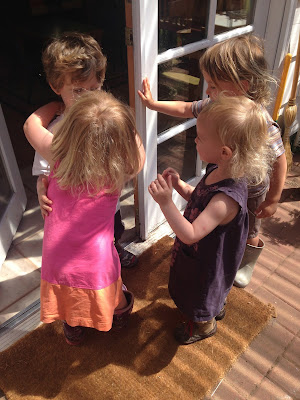 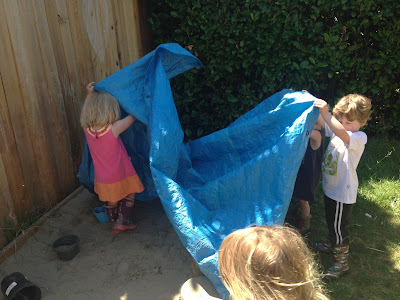 Immediately after hugs were exchanged, everyone ran to open the sandbox together.
I stood back and let them figure it out. 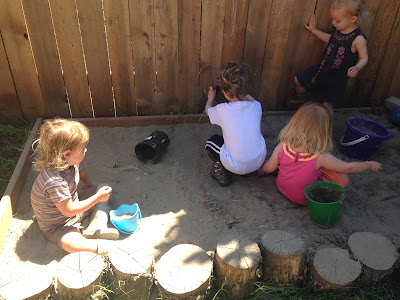 The good feeling lingered as the children spent a long time mixing
and digging and sifting in the sandbox.

It is important to understand when children are filled with good intentions and wish to show kindness to others.  My role as teacher is to stay clear of the action, and enjoy the happiness they share.

This happens in other ways in the classrooms well. 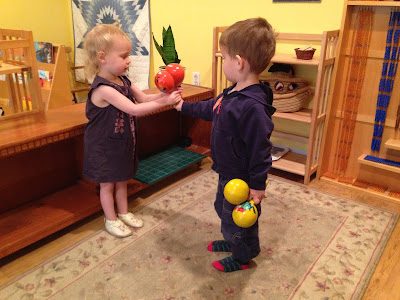 Inviting his friend to play some music together 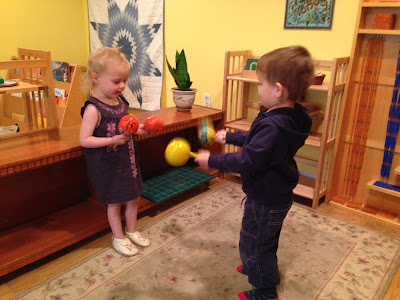 Now we can both do it! 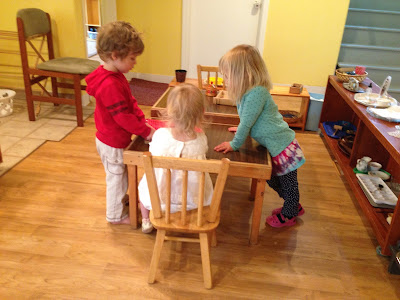 This dressing frame can be tricky. Calling on friends to help when the going gets tough creates a feeling of community and helpfulness. 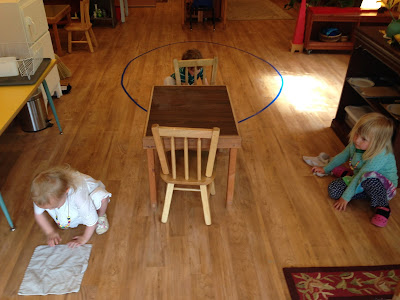 It doesn't matter who spilled the water; when it's time to wipe it up, sometimes
everyone wants in on the action!

The freedom to interact, choose activities that appeal to them, and take care of problems or needs independently are what bring these kinds of actions about; no amount of cajoling or instruction on the part of an adult can convince children to help each other. The children can spread joy among themselves, performing gemilut hasadim in the most natural, heartfelt way.

Posted by Morah Ariel at 7:33 PM No comments:

We have been experiencing extremes of weather lately as we head into summer. The children are very concerned and interested in the weather and we talk about different things we can do in different weather and the different clothes we can wear. 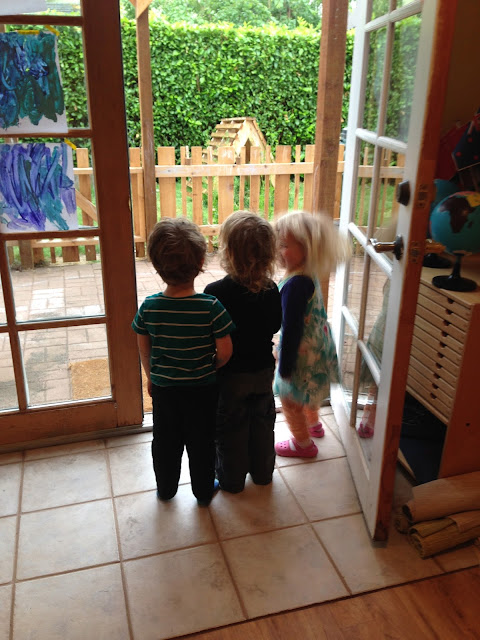 Last week was quite rainy! It's excited to watch the rain come falling down. 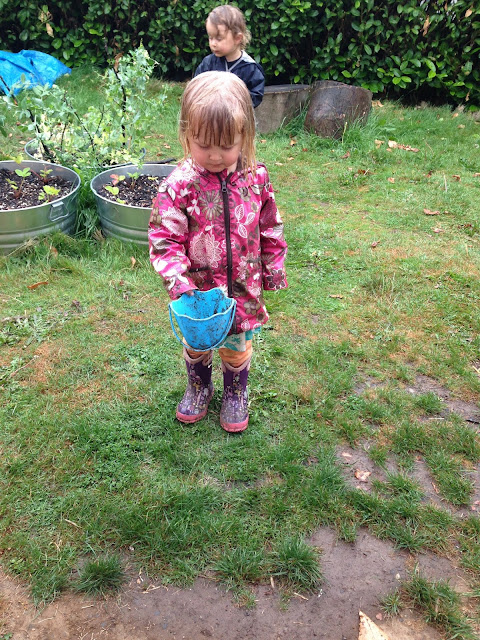 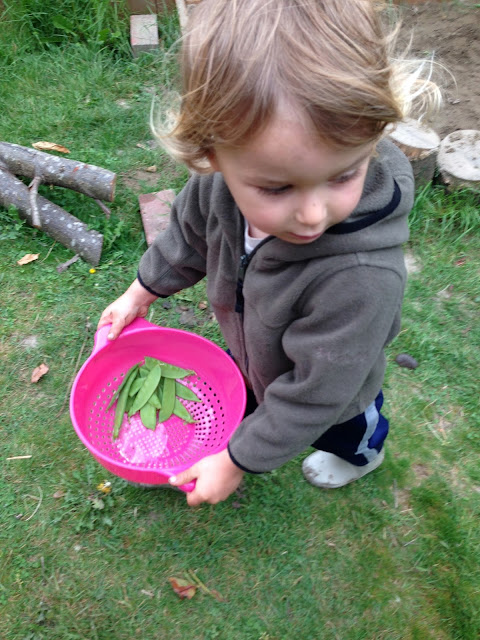 All the rain refreshed the garden and we harvested some snow peas to share for snack! 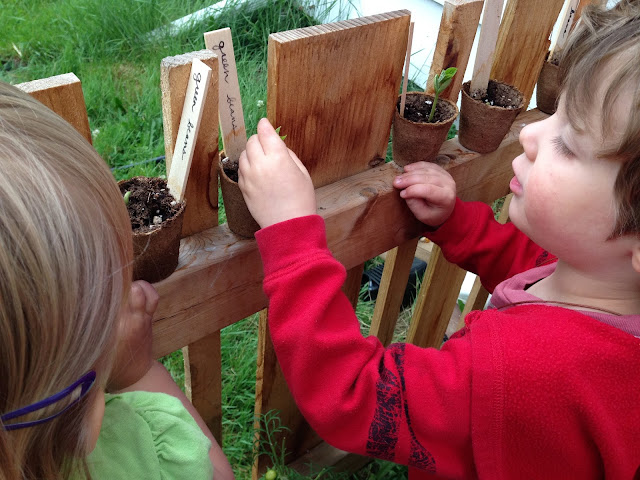 Checking our green beans as they sprout in their peat pots. 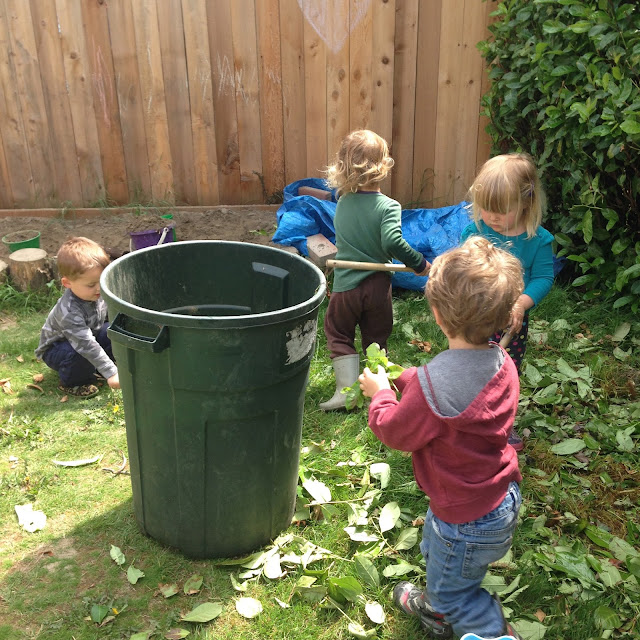 The hedge got a trim! Let's all put the leaves in the yard waste barrel! 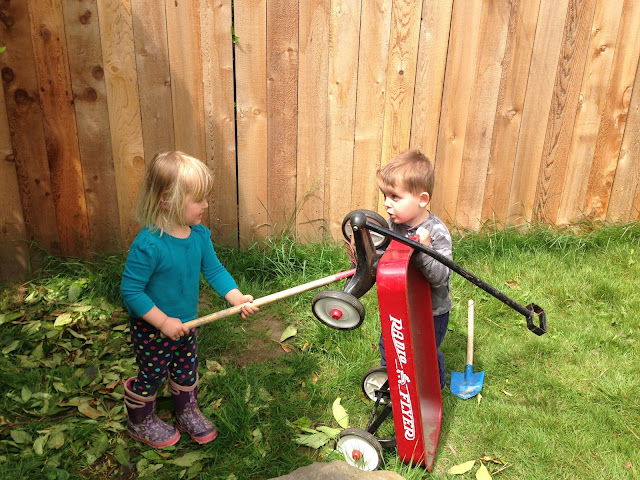 "Fixing" the wagon together.

Inside we have been very busy learning new things to do, practicing ones we've tried before, and enjoying our friends. 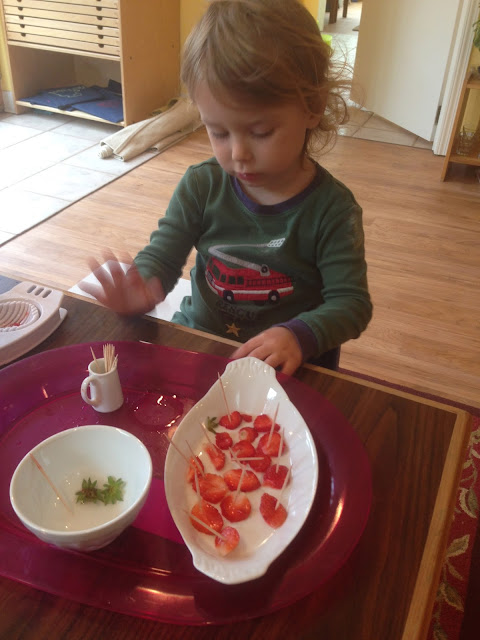 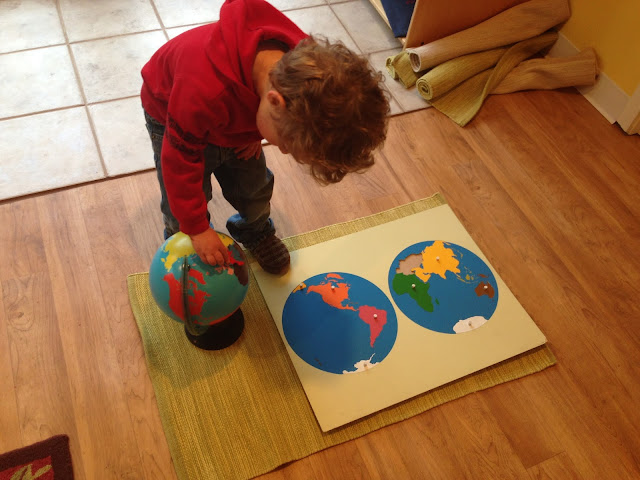 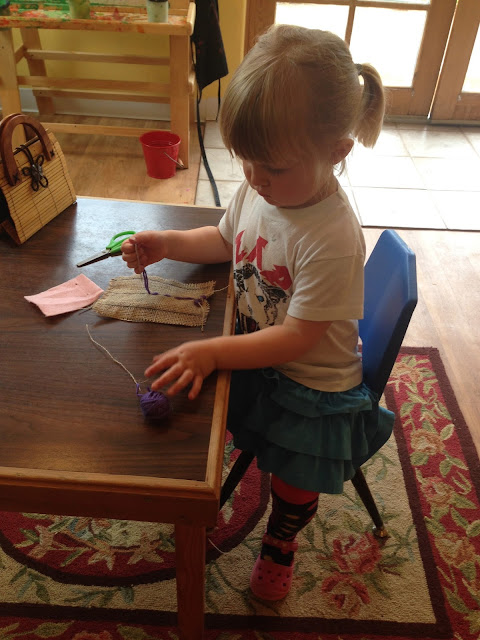 Stitching on burlap is a nice way to introduce sewing. 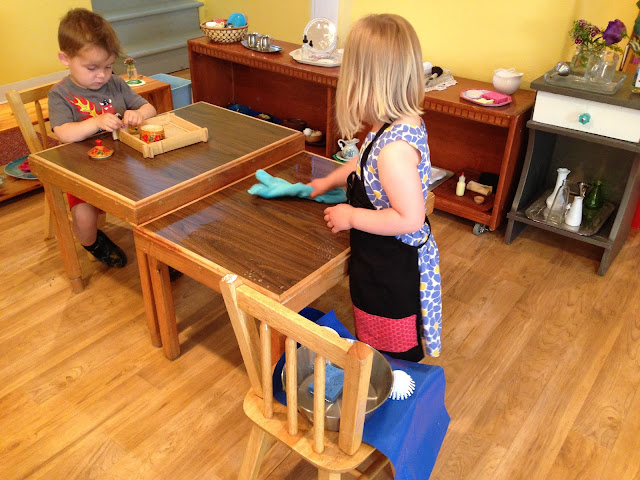 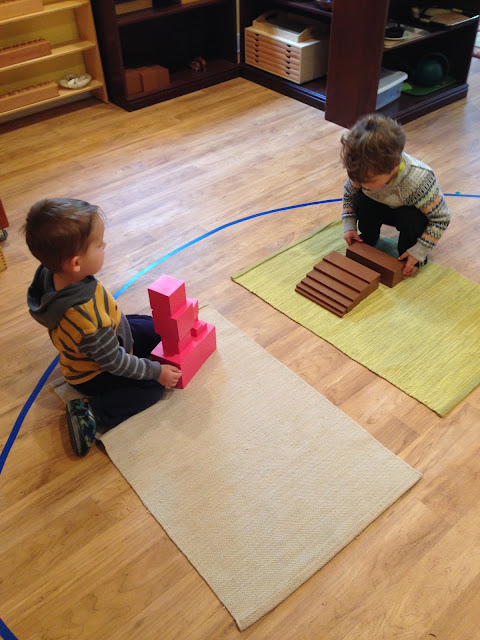 So many ways to build. This scene plays out in every Montessori classroom, sometimes every day! 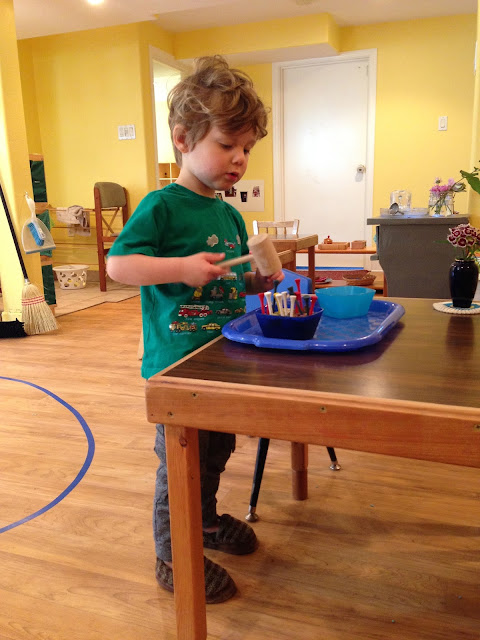 A preliminary hammering work will get us ready to use real hammers and nails. 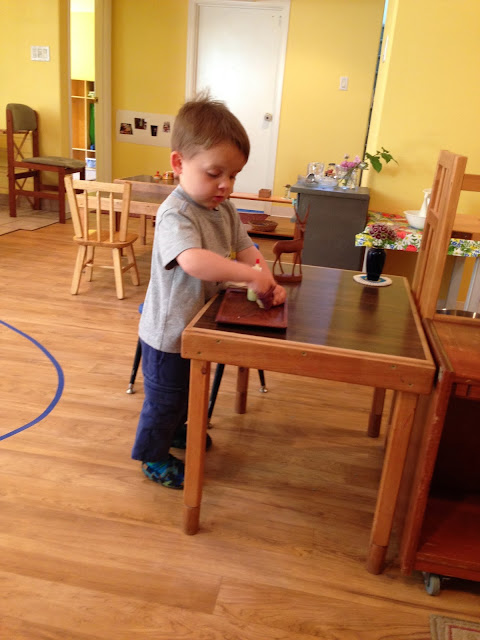 Polishing the wooden gazelle until it glistens. 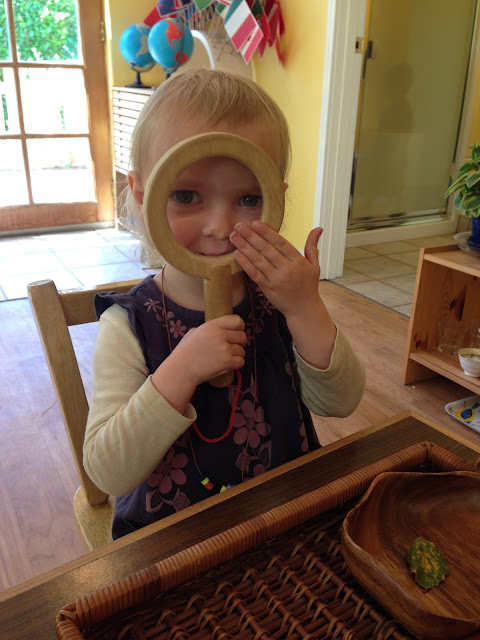 Exploring natural objects with the magnifying glass, and taking a new perspective on the world. 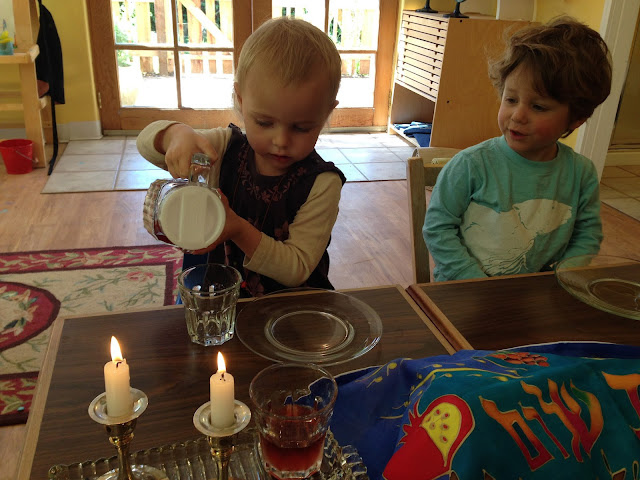 Pouring juice into her cup as we get ready for Kiddush. We love Shabbat and the ritual of celebrating together. We also love challah and juice, of course!
Posted by Morah Ariel at 3:16 PM No comments: